Climate change and adaptation to it play a large part in Metsähallitus' strategy. Our Climate Programme promotes the attainment of Finland's climate targets and transition to a carbon-neutral society by 2035 through increasing carbon sinks, carbon storage and clean energy production as well as by cutting our emissions.

The baseline level of the Climate Programme data was calculated for 2018. The calculations are based on data produced by the 12th National Forest Inventory. The development of the carbon sink and carbon storage is assessed annually on the basis of this data. The carbon footprint is always calculated for the previous year, and the figures for 2021 consequently apply to 2020. 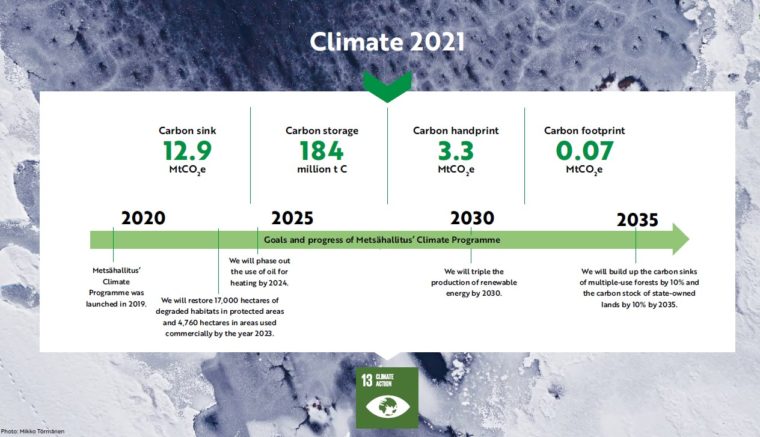 Our goal is to increase the carbon sink of multiple-use forests and the carbon stock of state-owned land by 10 % by 2035.

In 2021, the calculated carbon sink of multiple-use forests was 8.6 MtCO₂e and the carbon stock of trees on state-owned land was calculated at 184 million t C.

Key measures for increasing carbon sequestration and building up the carbon storage in forests include increasing fertilisation and using selectively bred cultivation material for forest regeneration. In 2021, we significantly increased fertilisation, and forests were fertilised across 29,000 hectares. The increased fertilisation will produce its full impact of around 0.435 million tonnes CO2 eq. a year on increasing the carbon sink from 2029 onwards. In addition, we planted around 17 million tree saplings in the regeneration areas of multiple-use forests.

Wind power capacity built on state-owned land as well as energy wood and residues from roundwood delivered to customers reduce carbon dioxide emissions from fossil fuel based energy production. Products made of sustainably produced wood from multiple-use forests replace fossil raw materials, and some of the harvested timber will continue to act as a carbon sink in wooden buildings and other long-lasting products after it has been processed.

Our carbon handprint reflects these positive climate impacts that our products and services generate in value chains. Our carbon handprint in 2021 was 3.3 million tonnes of carbon dioxide equivalent. While the growing amount of wind energy produced in state-owned land and water areas increased our carbon handprint, it was decreased by reduced deliveries of energy wood and a declining trend in the average carbon dioxide emissions from electricity production based on the non-verified residual distribution consumed in Finland.

In 2021, the wind power capacity built in areas controlled by Metsähallitus amounted to 489 MW, a year-on-year increase of some 240 MW.

We mitigate the negative effects of climate change on biodiversity

Alongside climate change mitigation and adaptation, maintaining and developing biodiversity in land and water areas is an important goal for us.

In 2021, under the Helmi habitat programme and with LIFE funding, we managed and restored protected areas across almost 13,000 hectares. We also restored fish habitats and carried out active ecological management work in multiple-use forests. Metsähallitus Forestry Ltd launched a demonstration project aimed at safeguarding occurrences of endangered species in multiple-use forests.

We reduce our carbon footprint

In 2020, our carbon footprint was approx. 0.07 million tonnes of carbon dioxide equivalent, of which emissions from harvesting and transporting timber accounted for around 82%. Our calculated total emissions decreased by around 18% compared to 2018. This decrease is mainly explained by a reduction in emissions generated by Metsähallitus Forestry Ltd, particular factors in which were a drop in the harvesting and transport volumes of roundwood.

Over a longer term, the declining trend in emissions from timber harvesting and transport is also due to a transition towards increasingly economical and climate-friendly solutions and fuels in the transport and harvesting fleet. We contribute to this development by awarding points for new harvester fleet in resource procurements and ensure reliable and efficient road transport of timber by imposing age limits on the fleet.

Our key actions for reducing our carbon footprint include the introduction of an ETJ+ energy efficiency system, phasing out of oil in heating our premises by 2024, and improving our procurements, logistics and operations.

In our Climate Programme, we commit to reducing our carbon footprint from travel by 10% a year compared to the baseline level of 2019, among other things by making use of videoconferencing, arranging to have several meetings on one trip and using more environmentally friendly modes of travel.