According to a report commissioned by Metsähallitus, the Korsnäs Offshore Wind Farm would bring billions in tax benefits to the Finnish population and employ thousands of people during its lifecycle.
– The offshore wind farm would significantly increase Finnish green energy production at the end of the current decade, said Juha S. Niemelä, Director General of Metsähallitus at the opening ceremony of the Korsnäs office on Monday 14 March 2022.

Metsähallitus has for several years used quality bonuses to encourage its contractors to do a good job. Rather than having its own machinery, Metsähallitus outsources all contracting services to entrepreneurs in the sector through competitive tendering.

Peatlands and other wetlands have been restored in a large project: the last years of Hydrology LIFE are approaching. 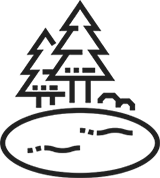 One third of Finland’s surface area

Read more about state-owned lands and waters
All projects

Seabed soundings about to start off Korsnäs

Metsähallitus has ceased cooperation with Russia

Other Metsähallitus websites in English

Fishing and hunting experiences in Finland

Pages of the wild forest reindeer