The Flying Squirrel LIFE project improves the conservation of flying squirrels in Europe through co-operation. The project brings together key actors in land use, such as land-use planning and forestry, as well as information on the habitat networks of flying squirrels.

In Europe, the flying squirrel is only found in Finland and Estonia. The species is classified as vulnerable within the European Union due to the rapid decline in its population.

Read more about our work in our excellent brochure and watch the video:

Check out the published project guides on the Guide page 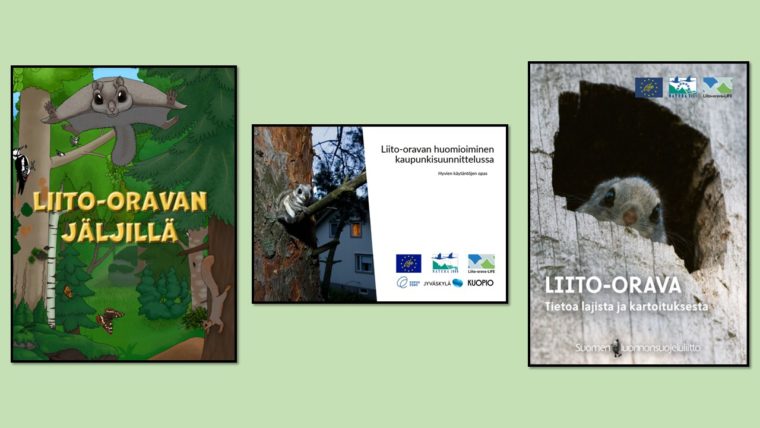 The biggest threats to the flying squirrel are the reduction and fragmentation of suitable habitats, i.e. breaking down into smaller and separated areas.

Safeguarding habitat networks is a sustainable way of improving the long-term conservation of flying squirrels. Because this is a major challenge, tackling it will also require a wide range of actors. The Flying Squirrel LIFE project is coordinated by Metsähallitus Parks & Wildlife Finland, with 17 partners from Finland and Estonia. The project covers the entire range of flying squirrels in Europe.

We promote the conservation of flying squirrels through four sub-objectives:

The project has approximately 120 areas of activity in total. The budget is EUR 8.9 million, most of which is EU LIFE Nature Programme funding. The project will last approximately 6.5 years (1 August 2018 – 31 March 2025).

Have a look at a flying squirrel nest through nest cameras!

Is its coat in good shape? Can you see the tail?

The life of the flying squirrel can be followed by watching nest camera recordings. The project has already installed two nest cameras to follow flying squirrel nest boxes. The nest camera maintained by the Finnish Association for Nature Conservation (FANC) was installed at a nest in Paltamo, Kainuu, and another nest box camera was set in a mixed forest in Kuopio, North Savo.

Live broadcasts have ended. The cameras have captured many amazing as well as tragic moments of a flying squirrel’s life, including lots of cubs playing, glimpses of other forest species and a fateful visit to the nest by a pine marten.

The local Centre for Economic Development, Transport and the Environment (ELY Centre) granted permits for the camera.

The project has received funding from the LIFE Programme of the European Union. The material reflects the views by the authors, and the European Commission or the CINEA is not responsible for any use that may be made of the information it contains.