Why and how to take care of esker nature? (youtube.com)

Our Light & Fire LIFE video shows how fire helps to protect nature on eskers and how we can save one of our treasures, the rare Pulsatilla patens flower. (Choose English subtitles: Settings / Asetukset > Subtitles / Tekstitykset > English / Englanti).

Light & Fire LIFE Project aimed to protect the biodiversity of coastal meadows, dunes, eskers, heaths and other sunlit environments. The methods included environmental management-related burning, clearing of trees, the translocation of endangered species and removal of alien species. For the first time in Finland, a single project took care of land owned by the state as well as by private landowners and companies.

The Light & Fire LIFE project carried out work in 69 Natura 2000 areas all over Finland to benefit habitats created through heat or fire and the species which make their home in such environments. Fire once again spread through these areas, though in a controlled manner, to protect the environment’s endangered and dwindling species, such as Pulsatilla patens and Thymus serpyllum. These species were also reintroduced to favourable growth sites. Bushes, trees, lake reeds and alien species such as Rugosa rose on the other hand, were removed in order to return the original level of heat and light.

Environmental education was also an important goal for the project. Camps for volunteers were organised in the archipelago and along the coast. 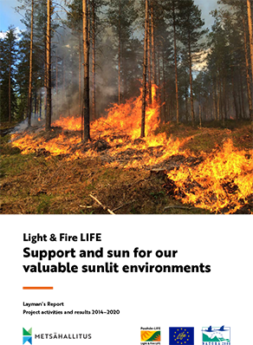 The Layman´s Report summaries the results of the project: Light & Fire LIFE. Support and sun for our valuable sunlit environments. (julkaisut.metsa.fi)

The Light & Fire project was one of the LIFE Nature projects financed by the European Union. Half of the project’s EUR 4.06 million budget was received from the EU. The project was coordinated by Metsähallitus, Parks & Wildlife Finland. Project partners included HAMK University of Applied Sciences, the North Savo Centre for Economic Development, Transport and the Environment, The Finnish Forest Centre, UPM and WWF Finland.

What are sunlit environments?

The flora and fauna in sunlit environments have adapted to dryness, high levels of radiation from the sun, high temperatures and sharp fluctuations in temperature, as well as sparse sources of food.

A nature trail was extended and provided with new information for hikers and schoolchildren in Komio nature reserve by the project.

The information stands tell about the restoration work to help esker nature and include QR-codes. Further information on restoration of forests and management of sunlit habitats is available (in Finnish) by scanning the code with the mobile device equipped with a QR reader application.

The close co-operation continued as the projects organized a joint workshop to develop use of fire in restoration of Natura 2000 areas. The event brought together experts from 8 European countries in April 2017.

The workshop showed clearly that fire is needed to maintain the diversity in boreal forests. Good examples from Sweden and Finland show that prescribed use of fire e.g. in forest restoration is a safe and efficient way to mimic natural fires that are currently absent from boreal forests. In addition to maintaining valuable species and habitats, the use of prescribed fire benefits also people e.g. by providing possibilities to train for fighting uncontrolled fires.

The project has received funding from the LIFE Programme of the European Union. The material reflects the views by the authors, and the European Commission or the EASME is not responsible for any use that may be made of the information it contains.