Ministery of the Environment, the Finnish Environment Institute and Metsähallitus, Parks & Wildlife Finland 5.12.2019

Finns have actively participated in the international research cooperation that informed the decision to establish protected areas.

The natural monument established on the Zaonezhye Peninsula, which juts into Lake Onega in the Republic of Karelia, is around 1,504 hectares in size. The Republic of Karelia adopted a decision to establish a protected area in June 2019. The purpose of the protected area is to safeguard the unique spruce and pine forests of the peninsula, which are home to rare moss, fungi and insects.

The new natural monument on the Zaonezhye Peninsula is also a culturally important site, as the protection of the area guarantees the preservation of a unified forest landscape on the island of Kizhi, which is a UNESCO World Heritage Site. In Russia, natural monuments are also established in areas of special scientific, cultural or historical importance. In a press release, the Ministry of Natural Resources and the Environment of the Republic of Karelia states that the establishment of the new protection area is part of the programme for the 100th anniversary of Karelia.

An international research group proposed the establishment of a protected area on the Zaonezhye Peninsula because a significant number of the moss, lichen, vascular plant, mushroom and insect species in the area are endangered. The research group surveyed the natural values of the area as part of the Barents Protected Area Network (BPAN) project coordinated by the Finnish Environment Institute. 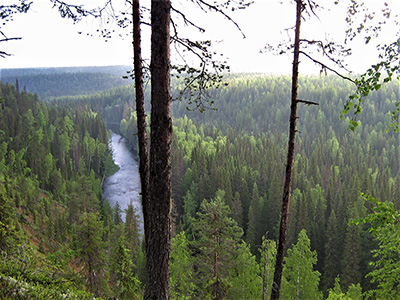 In October 2019, the Arkhangelsk region established a sanctuary area in the old-growth forest between the Northern Dvina and its tributary Pinega. The new sanctuary includes 300,000 hectares of forest, which has been largely spared from the effects of human activity. The Ministry of Natural Resources and Forestry in the Arkhangelsk region reported that the establishment of the sanctuary was the result of over 15 years of negotiation.

The forests of the Northern Dvina are the last major untouched forest areas on the European side of Russia. The area plays an important role as a carbon sink and as a habitat for more than 60 endangered species. The sanctuary established in October is home to several endangered animal species, such as the wild reindeer, white-tailed eagle, osprey and Eurasian eagle-owl, as well as endangered plants including the lady’s slipper (Cypripedium calceolus), ghost orchid (Epipogium aphyllum) and tree lungwort (Lobaria pulmonaria).

The old-growth forests in the region have declined considerably over the past decades. In the new sanctuary area, all activities that damage forest ecosystems are prohibited. The international research group also assessed the conservation value of the old-growth forests of the Northern Dvina as high in the BPAN project.