Ilmatar Energy has started constructing Finland’s largest wind farm at Piiparinmäki in the areas of Pyhäntä municipality and Kajaani. Directly and indirectly, the construction work of the wind farm project will create more than 500 person-years of employment. Piiparinmäki wind farm, a project originally developed by Metsähallitus, will generate significant property tax and rental revenue over the next 30 years, both regionally and nationally. 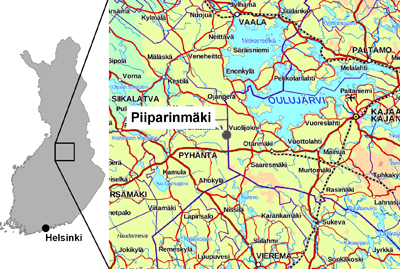 Ilmatar Energy will build the wind farm, while its technical and commercial operation will be managed by Ilmatar Service. The project is financed by Glennmont Partners, one of Europe’s largest clean energy fund managers. This is Glennmont’s first investment in the Nordic countries. Including Google’s additional investment in its Hamina data center and the power purchase agreements concerning two as yet un-built wind farms which prompted it, total investments in Finland will clearly exceed the one billion euro mark.

”Energy-intensive investments like Google’s Hamina data center are increasingly going for the most cost-effective form of energy production, which is the new wind power. We are very happy to facilitate this investment in Finland. The Piiparinmäki project will have significant impacts on Kainuu’s regional economy: the wind farm will create hundreds of jobs in the construction stage, it will bring significant property tax and rental revenue for the municipalities and the central government over the next few decades, it will attract investments to infrastructure construction, and over 40 wind generators will be permanently established in Finland”, rejoices Kalle Pykälä, Chairman and Co-founder of Ilmatar Windpower.

In total, Piiparinmäki wind farm will produce new green energy for the Finnish electrical grid at a nominal power of 211 MW.

”Once it has been completed, this wind farm built on state-owned land in a project prepared by Metsähallitus will produce over 700 GWh of clean electricity for the Finnish power grid every year. It will have almost twice the power generation capacity of today’s largest wind farm. The annual production at Piiparinmäki would be sufficient to power every studio flat in Finland”, Pykälä illustrates.

Ilmatar bought the project rights to Piiparinmäki from Metsähallitus in June 2018.

“Increasing the production potential of renewable energy is part of Metsähallitus’ climate programme. We have been involved in the project development of over ten per cent of the wind power capacity built in Finland by the beginning of 2019”, explains Tuomas Hallenberg, acting Director General of Metsähallitus.

”We started developing the Piiparinmäki wind power project as early as 2012, and now that a decision has been made to go ahead with its construction, this sustained work has come to fruition. The project will have major positive impacts on both the regional and the national economy”, Hallenberg continues.

Kajave Oy’s contribution to the project will consist of building the wind farm’s grid connection.

”We will be delighted to do our bit for enabling the production of domestic renewable energy”, says Heikki Juntunen, Managing Director of Kajave.

Ilmatar Energy
Ilmatar Energy operates across the whole value chain of wind power production, from project development and construction of wind farms to long-term electricity production as well as technical and commercial management through Ilmatar Service.

Metsähallitus
Metsähallitus is a pioneer in broad-based bioeconomy. We are an unincorporated state enterprise managing one third of Finland’s surface area. We manage and develop state-owned land and water areas in a responsible manner so that they bring maximum benefits to Finnish society.

Kajave Oy
Kajave Oy serves its customers by distributing electricity in the power grid area of Kainuu and parts of North Ostrobothnia. In its area, the company supplies electricity, builds, operates and maintains the power grid, and purchases services related to these functions.

Kajave is part of the Loiste group owned by the City of Kajaani, municipality of Sotkamo and Kanerva Energia Oy.